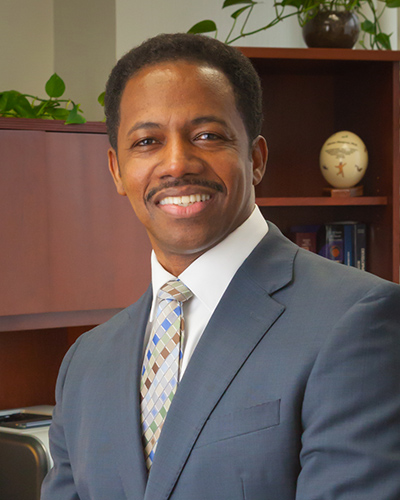 
GRADUATE:
Rutgers University and the University of Medicine & Dentistry
Degree: Doctor of Philosophy in Cell and Developmental Biology

In the Thompson laboratory, a team of researchers are committed to the study of women reproductive health.

Reduced DNA Repair Capacity Leads to Increased Risk of Uterine Fibroids (UFS) in African Americans
Uterine Fibroids (UFs, AKA: leiomyoma) are the most important benign neoplastic threat to women's health. They are the most common cause of hysterectomy causing untold personal consequences and hundreds of billions of health care dollars worldwide. Currently, there is no long term effective FDA-approved medical treatment available, and surgery is the mainstay. The etiology of UFs is not fully understood. In this regard, we and others have recently reported that somatic mutations in the gene encoding the transcriptional Mediator subunit MED12 are found to occur at a high frequency (~85%) in UFs. UFs likely originate when a Med12 mutation occurs in a myometrial stem cell converting it into a tumor-forming stem cell leading to a clonal fibroid lesion. UFs do not affect all races equally. Increased prevalence of UFs in African- American (AA) women has been consistently observed for >120 years. The molecular attributes behind UFs ethnic disparity are not fully realized; however, a growing body of literature implicates unfavorable early life environmental exposures as potentially important contributors. Environmental exposures during sensitive windows of development can reprogram normal physiological responses and alter disease susceptibility later in adult life. Compelling preliminary data from our laboratory further identified that such exposure exerts two alterations in exposed rat myometrium: (1) permanently expands myometrial stem cell compartment and, (2) decreases DNA damage repair capacity. Quantitative PrimePCR array indicated that several DNA damage repair genes are significantly down regulated including RAD50, Sirt, and TP53 in myometrium from rats neonatally exposed to xenoestrogens. Importantly, in the human equivalent, we have encountered similar observations. MyoF (high risk myometrium from fibroid uteri) exhibited expanded myometrial stem cell compartment as well as a decrease in DNA damage repair capacity as compared to MyoN (normal myometrium from healthy fibroid-free uteri). This was significantly more noticeable in AA women. Importantly, key DNA repair genes of RAD50, Sirt1, MLH1, and MLH3 were markedly decreased in MyoF vs MyoN. Our central Hypothesis: Early life exposure, during the sensitive period of uterine development, to environmental toxicants, which is more prevalent in AA, permanently expands the number of myometrial stem cells as well as permanently reprograms and attenuates key DNA damage repair genes leading to reduced myometrial DNA damage repair capacity. Chronic reduction in DNA repair capacity eventually leads to the emergence of mutations such as Med12 in myometrial stem cells converting them into fibroid tumor-forming stem cells and subsequently leads to the development of UFs. We will address this hypothesis using the following three specific aims; Specific Aim 1: Determine whether a small but distinct myometrial stem cell population serves as pre-fibroid tumor progenitors in AA versus Caucasian (C) women. Specific Aim 2: Identify PcG/ TrxG (histone methylation regulators) regulated DNA repair target genes that contribute to developmental reprogramming in UF development. Specific Aim 3: Characterize whether Vitamin D3 is capable of increasing DNA repair capacity via reversing disrupted epigenetic programming in myometrial stem cells. Impact: These paradigm shifting concepts will enable us to identify genomic and epigenomic risk profiles associated with increased susceptibility to UFs in AA women. Such knowledge will inform an efficient precision medicine approach towards the development of novel preventative and therapeutics strategies for this common health disparity challenge.

Role of Exosome-Encapsulated Microrna in the Pathogenesis of Endometriosis
Endometriosis, accounts for 10-15% of pelvic pain and infertility in women of reproductive age. Endometriosis is also the single major cause for hysterectomy in that age group in the USA, with an annual estimated societal cost of ∼$69.4 billion. Currently definitive diagnosis of endometriosis requires surgery. Surgical removal of lesions, hormone suppression, and anti-inflammatory agents are the current gold standards of therapy, but these approaches are associated with serious side effects and a high incidence of relapse. The invasive nature of surgery, coupled with the lack of a conclusive laboratory biomarker for the disease, results in a mean latency of 7–11 years from onset of symptoms to definitive diagnosis. Therefore, identification of mechanisms involved in the early pathogenesis of endometriosis and non-invasive diagnosis and strategic therapies for treatment are critical. Our long-term goal is to develop a feasible diagnostic tool based on the findings here while examining the role of the exosomal uptake that results in modulation of gene expression in recipient cells leading to inflammation, proliferation and differentiation through this mechanism of cellular communication, yet to be explored in the context of endometriosis. Our central hypothesis is that specific exosomal miRNA contribute to the chronic inflammatory condition of endometriosis.  We formulated this hypothesis based on the literature and our research on exosomes as well as our preliminary data showing exosomes derived from patients with endometriosis had both pro-angiogenic and proinflammatory effects all factors that are associated with the pathophysiology of endometriosis. We were the first to report that disease stromal derived exosomes promoted pro-angiogenesis and inflammation and here we expand to mechanistic aspects of exosomal biology and miRNA manipulation in endometriosis. Furthermore, we identified that specific miR-199a-3p and miR-4286, are significantly over-represented in exosomes derived from endometrial stromal cells (ESC) from endometriosis patients compared to controls. Gene prediction software and literature search show that these miRNAs directly or indirectly target the STAT3 and NFҡB signaling pathways and have been shown to play a role in several diseases including ovarian cancer.  A major goal of this application is to elucidate the function of exosome encapsulated miRNAs as it relates to target cell response (inflammation, proliferation and cell differentiation) and will be addressed in these two aims. Our research team includes experts in the following areas: minimally invasive surgical treatment of endometriosis, molecular imaging, molecular biology, organoid development, exosome encapsulated miRNA engineering, gene therapy and reproductive endocrinology.  This qualified group of investigators will ensure that our discoveries are linked to basic concepts of the pathogenesis of endometriosis and role of secreted exosomes as natural carriers of functional miRNAs from endometrial stromal cells and their interplay with epithelial cells.